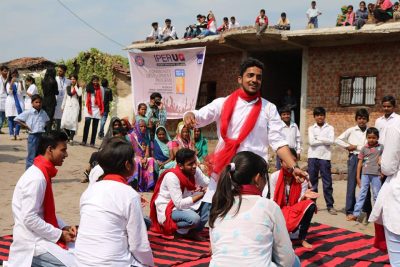 IPER-UG NSS Unit – One of the prominent and active Unit of NSS Bhopal, volunteers organised a Health awareness Camp at Gram – Keeratnagar, Bhojpur Road, in Raisen District. The health awareness highlighted need for cleanliness and hygiene for increasing the number of healthy people living in rural areas, resulting in a progressive village.

Program started with marathon displaying placards and banners in support of cleanliness, hygiene and health. The rally ended at the Panchayat Office where the Sarpanch Suraj Bhaiyya, addressed the gathering of IPER-UG students and villagers. Thanking the IPER-UG NSS Bhopal volunteers for organizing such awareness camp, he told the villagers to learn the minute details being shown by the NSS volunteers and implement them in their day to day activities.

BM IV Students gave a lecture about the importance of jogging and exercises to avoid diseases. They also informed that sleeping well is also necessary for the body to relax and regain whatever energy had been lost during the execution of daily chores. Drugs and Cigarettes are harmful and people should stay away from such items to remain healthy throughout their life. They also pointed out to the water bodies in the surroundings of the village emitting bad and foul smells are harmful. It should be kept clean so that the ground water remains drinkable. Tree plantation can help in keeping the surrounding air clean as well as help in restoring the degraded environment.

Thereafter B Com II and BM II students held a demonstration of Exercises which can be done daily for few minutes by everyone to lead healthy and disease free life. Children and adults took part in the live interactive session. Push-ups and sit-ups saw huge enthusiasm amongst the villagers.

Dr. Lakhan Singh, Physician specially invited for this program highlighted the importance of taking balanced diet for healthy life. He told the gathering to follow a fixed schedule daily for eating, working and sleeping specially to the youths, who now a days have a bad pattern of eating junk food. Mr. Abhishek Singh, Faculty IPER-UG asked several question to the Doctor regarding waste flowing and the filth lying here and there. The Doctor suggested that water should be filtered before use and people should keep their surrounding clean and clear so that the waste and filth do not mix up with soil and water to contaminate it, which also results in generation of virus and diseases.

A free health check up was conducted by the Doctor for the villagers and several of them took part. Ladies specially got their Blood Pressure checked and got advice regarding precautions they should take for remaining healthy.

A tug – of – war was played between the villagers and also between IPER-UG students and village boys.

Final activity was a skit played by B Com (Hons) and BBA students depicting the various schemes launched by the governments which are not heard of by villagers as there are no means to convey details of such programs to them. The Nukkad natak was played to explain these villagers about importance of these schemes, so that rural folks are made aware of Swachchata Abhiyaan and Healthy India Program so that they can take advantage of such schemes.

IPER-UG, HOD Management and IPER-UG, HOD Commerce then presented a memento and acknowledgement letter to the representative of Surpanch Manoj Bhaiyya. He thanked the IPER-UG College Unit of NSS Bhopal for organizing such program and requested for continuation of help with regard to other rural issues as well.