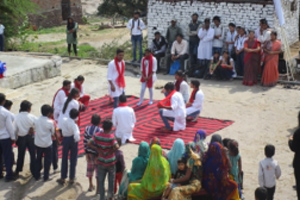 Our undergraduate students organized a NSS (National Service Scheme) activity on the theme – “Right To Vote” at Keerat Nagar, Raisen today. The objective of this one day camp was to bring awareness amongst the villagers to exercise their right to vote in every election held in their vicinity.

Students enacted a rally displaying the banners and posters about the program. Slogans were raised in favor of voting and participation of everyone in this democratic process. The rally went through the narrow lanes of village urging people to participate in every election.

This was followed by a ‘Briefing’ by Student Volunteers on the rules and regulations governing Voter’s rights and giving details about the Election Process including Right to Information about candidates and Neither Of The Above (NOTA) option selection on the Electronic Voting Machine (EVM).

Volunteers also staged a Street Play (Nukkad Natak) highlighting the importance of participation in voting process on the day of elections. Street play emphasized on not to treat -election day as a holiday but its a day wherein everyone should go and cast their votes at their respective booths.

Volunteers also laced the day up with a skit which showcased the importance of exercising the right by individuals who are literate and involved in social causes, but still do not like to participate in giving their vote on the day of election. The skit highlighted the disadvantages of wrong candidates getting elected due to non participation of all citizens in the election process. Skit stressed the need for everyone to participate so that right candidates are elected for formulating good laws suited to Indian citizens.

Finally, Mock Drill activity showed the election process where in candidates standing in elections, adopt malpractices to woo the voters towards their side by indulging in unethical practices and also, how a right candidate should conduct in campaigning process was depicted in this drill. Such comparison helped the residents to separate bad candidate and choose the right one.

This activity included canvassing and actual set-up of Election Booth with facility to cast vote in the ballot box.

The event closed with Strategic Group Member Prof. Mahesh Soni thanking the village and the sarpanch on behalf of the Group Director, IPER Group of Institutions Prof. (Dr.) A. S. Khalsa. A memento of IPER was given on behalf of the Institute to the representative of Sarpanch, Gram Panchayat, Keeratnagar.

The event was attended by large number of people residing in the village as well as those of nearby areas. The program was well appreciated and several residents requested IPER-UG NSS Program Coordinator, Mr. Abhishek Pratap Singh to conduct similar awareness campaigns on regular basis.

At IPER, we value and undertake “Community Development Program” for our students.  Various undergraduate and post graduate programs are on offer at Institute of Professional Education & Research (IPER) that are integrated  with “Community Development Program” to inculcate social-well being in students and enhance their sense of responsibility towards the society whilst adding other skills such as-business management, leadership, etc.